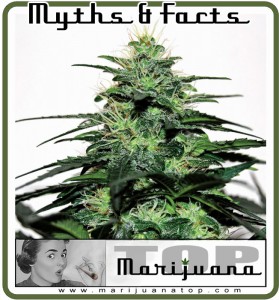 There is so much misinformation out there about weed, so here is a top 10 list of the most persistent myths about the soft drug. It will show you the existing myth and after that the real facts instead. Is weed harmess? Is pot prohibition working? Can casual use lead to addiction? Read on to find out the answers to these and more questions about marijuana.

1 – Myth: Marijuana is a dangerous drug

Fact: Study after study has found that pot is less harmful than alcohol and tobacco, much less “hard” drugs like cocaine and heroin.

Sources: Journal of the American Medical Association, Journal of Psychopharmacology

Fact: Heavy use can be harmful. Since pot smoke is chemically very similar to tobacco smoke, heavy pot smokers are at risk for some of the same health effects as cigarette smokers, like bronchitis and other respiratory illnesses. Again, though, the risks are from smoking, which isn’t the only way to use marijuana. Another hazard: car accidents caused by driving while high, though the risk is lower than from drunk driving.

Fact: Between 40 and 50 percent of people who have tried marijuana report a lifetime total of fewer than 12 days of use. About one-third of pot smokers report having used mariajuana for 10 days or less in the past year. About 6 million of America’s 30 million users over the age of 12 use pot on a daily or almost-daily basis according to household survey data – a fifth of those who say they have used marijuana in the past year – but they account for about 80 percent of all marijuana consumed.

5 – Myth: Marijuana use leads to dependence or addiction

Fact: It’s possible to become dependent on marijuana, but this only happens in a minority of the already relatively small category of heavy users. Research suggests that about nine percent of marijuana users became clinically dependent at some point, compared to 15 percent of cocaine users and 24 percent of heroin users.

Fact: The rate of pot use is higher among offenders than nonoffenders, but that definitely does not mean that pot causes criminal behavior. Another factor may be driving both results – or it could be that the causality goes the other way, and criminals are just more likely to use drugs. Furthermore, pot, unlike alcohol, doesn’t generally unleash aggression, so it’s much harder to link it to violent crime.

Fact: It’s true that marijuana smoke, like tobacco smoke, contains carcinogens. But even hardcore pot smokers typically consume much less pot than tobacco smokers do cigarettes, probably not enough to cause cancer. A 2006 UCLA study concluded that even heavy marijuana use does not lead to lung cancer. “We hypothesized that there would be a positive association between marijuana use and lung cancer, and that the association would be more positive with heavier use,” said the study’s lead author. “What we found instead was no association at all, and even a suggestion of some protective effect.” This and other studies suggest that pot can actually inhibit the growth of cancerous tumors. Finally, what risks there are involve smoking, and there are other ways to consume marijuana.

8 – Myth: Prisons are full of people in for marijuana possession

Fact: About 750,000 people are arrested every year for marijuana offenses in the U.S. There’s a lot of variation across states in what happens next. Not all arrests lead to prosecutions, and relatively few people prosecuted and convicted of simple possession end up in jail. Most are fined or are placed into community supervision. About 40,000 inmates of state and federal prison have a current conviction involving marijuana, and about half of them are in for marijuana offenses alone; most of these were involved in distribution. Less than one percent are in for possession alone

Fact: The Dutch have never formally legalized marijuana. They have an official policy, since 1976, of not enforcing existing laws against possession of small amounts or coffee shops, about 700 of them, selling small amounts. But growing, distributing and importing pot is still a crime in the Netherlands. While Portugal decriminalized all drugs, that is not the same thing as legalization. Acquisition, possession and use of pot are administrative offenses in Portugal, punishable by civil sanctions such as fines or community service.

Fact: In 2011, use of marijuana by teenagers hit a 30-year peak, with one out of every 15 high school students reporting they smoke most days, and for the first time U.S. teens reported smoking more pot than cigarettes. But: teenagers don’t smoke any more pot in states where medical marijuana is legal than in ones where it’s not. Legalization advocates argue that the best way to reduce use by minors is to legalize and regulate pot.